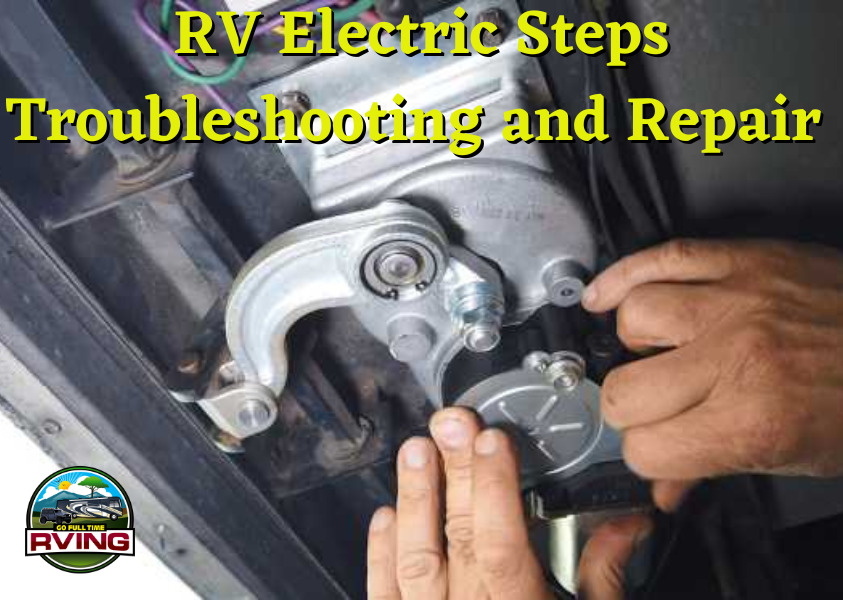 There are a few brands of steps for Class A motorhomes on the market but the most popular are Kwikee® Electric Steps. They have been the favorite of RVers for more than 40 years. Kwikee steps are versatile, durable, and time-tested. Each 300-pound capacity step is made in America and features air-pressed rivets in the pivot points instead of bolts for long-term strength. Kwikee steps automatically extend and retract when the door is opened or closed and also feature a reflective strip for added safety. Lippert Components purchased the Kwikee brand a number of years ago so you can find information under both names.

Unfortunately, they do occasionally end up having a breakdown. Our steps suddenly quit working at a stop for fuel on our way from Green River, Wyoming to Cheyenne, Wyoming. When we stopped for gas the steps wouldn’t extend. I took a quick glance to see if they may have been hit and damaged. Not seeing anything there wasn’t much else I could do in the fueling lanes.

Luckily the steps got stuck in the retracted position otherwise I would have had to disassemble the steps to tie them up. If the vehicle is driven with the step in the extended position, there is the possibility of causing major damage to both the step and the coach

Since we were only in Cheyenne for a few days I didn’t have time to get the items needed to troubleshoot the system. But before we left there I ordered the pigtails from Amazon so they would be in Colorado Springs when we arrived.

It’s easier and more cost effective to troubleshoot and replace bad components than to purchase a whole new step assembly.

Warnings Before Working on Motorhome Steps

A Volt Meter is needed to read wires and the voltage of the system in various configurations.

You will also need a charged 12-volt battery. I just used our coach battery by running a red and black wire to the area I was working in. My plan is to buy a 12-volt tool battery to make it easier to troubleshoot 12-volt systems on our rig.

The following Step Test Procedures are provided to troubleshoot and test all of the Kwikee Automatic Electric Step functions. They are designed to initially check the step’s basic functions separately from the RV wiring to determine whether or not the step is malfunctioning. The following procedures test the various components of the step until the source of the malfunction is located. Using these procedures will shorten and reduce the time spent troubleshooting.

If all of the step functions do work, the malfunction is either in the door switch, power switch, or vehicle wiring. Proceed to “Testing the 4-way Connector” section.

WARNING: Do not leave the wires connected during this test once the step has cycled either in or out. Failure to remove the wires from the battery will burn out the motor voiding any warranty.

Disconnect The 2-Way Connector Between The Step Motor And The Control Unit. Install the 2-way connector/pigtail Part Number 369413.

WARNING: Do not leave the wires connected during this test once the step has cycled either in or out. Failure to remove the wires from the battery will burn out the motor voiding any warranty.

If you have additional questions or need more assistance, contact Lippert Components, Inc. Customer Service at 1-574-537-8900.

Once the motor arrived it only took me about 15 minutes to install it and the steps back in working order.

If you found that the Gearbox was the problem with your steps, below you’ll find the steps to replace it.

If you found that the Control Board is the failed part, below are steps to change it out.

If you have electric steps then eventually the motor, gearbox, or one of these other components will probably wear out and need replacing. I hope I gave you enough information here to inspire you to repair it yourself. It really isn’t a hard process.

Have you had problems with your Kwikee/Lippert Electric Steps? Was it easy to fix it yourself?

Thank you for taking the time to read our article please let us know if you have any questions or comments below.