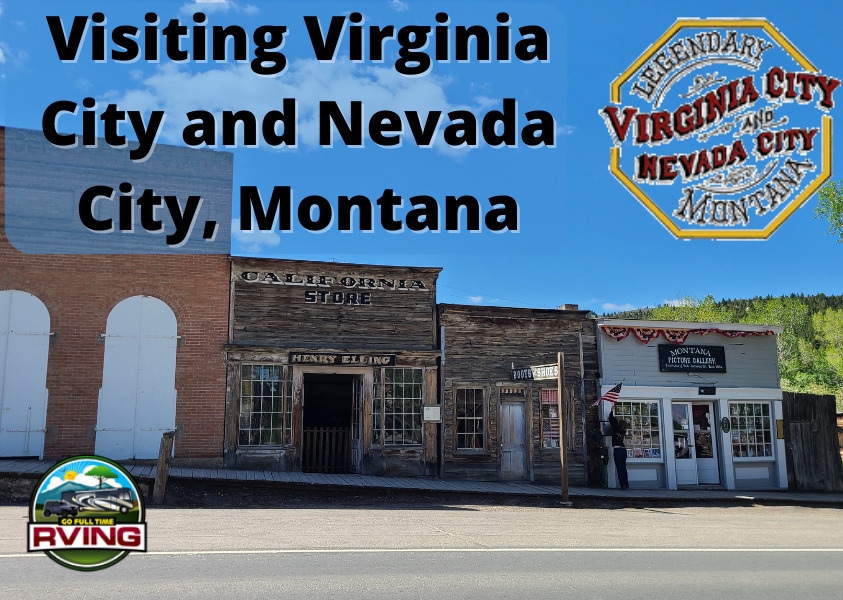 Madison County, Montana is where you will find the “ghost” towns of Virginia City and Nevada City. Virginia City is a well preserved, very much alive, ghost town which is frozen in time. It is located just 20 miles west of Yellowstone National Park (90 miles by road).

Visiting Virginia City and Nevada City, Montana was on our list of things to do while in the Yellowstone area in 2021. With our hectic schedule and issues with our Jeep, we just never made it there to explore. So 2022 we made a special emphasis to check out these two Montana ghost towns.

When the floods of 2022 hit the Yellowstone area and closed the National Park it made the perfect opportunity for us to go check out Virginia City and Nevada City.

In the depths of the Alder Gulch, a rich seam of gold was discovered by some prospectors on their way from Bannack to Yellowstone. Obviously, this fact could not remain a secret: after a short time, an army of thousands of gold seekers arrived from all over the west, ready to scour every inch of this corner of the Madison Valley in search of some shiny nugget that could make them rich, or to work in the mines.

The site of the richest placer gold strike in the Rocky Mountains with an estimated total value of 100 million dollars throughout the 18th and 19th century.

The discovery of gold in Alder Gulch in 1863 gave birth to the town of Virginia City. Within weeks Virginia City was a boomtown of thousands of prospectors and folks looking for riches in the midst of a gold rush. It was named the territorial capital of Montana for almost 10 years.

The news of the claim spread like wildfire and soon, at its peak, 10,000 people flooded the area. Miners and their crudely built shelters covered the hills around Virginia City. In fact, Virginia City became one of nine cities along the creek. Known as “Fourteen-mile City” for the numerous settlements that lined the gulch.

Virginia City grew to a considerable size, soon becoming an icon of the West, as well as the capital of the area: it remained so for ten years, from 1864 to 1875. As expected, not only gold prospectors arrived there, but also brutal bandits and outlaws: the name “Vigilante Trail” takes its name from the vigilante corps (Montana Vigilantes) that was created to defend the two towns from the raids of the bandits. Alder Gulch was the most fruitful and richest goldfield in the Rocky Mountains.

Today, Virginia City is considered the best preserved example of the many placer mining camps that flourished during the 1860s throughout the Rocky Mountain West. It provides an exceptional sample of commercial architecture of the mid-nineteenth century. Virginia City today has approximately 150 year-round residents and about 300 summer residents. It sits at an elevation of 5,680 feet, in a bowl along the edge of Alder Gulch. Approximately 500,000 visitors come through Virginia City annually.

We loved the original stores still with goods from the day. Some stores and buildings seemed like people just up and moved out leaving everything behind.

Virginia City is a quite lively and certainly authentic town, although inevitably catering for tourists, especially in the high season. After having parked your car near the Visitor Center on Main Street (Wallace Street), get a map and start exploring, allowing a couple of hours for the walking tour. You will come across more than sixty historic buildings, some original, others reconstructed and converted to commercial use. The greatest concentration of historic buildings dates to the 1870s, but some of the buildings’ later modifications also have historical significance.

As you walk the uneven, creaking planks in the shade of Wallace Street‘s wooden arcades, you’ll see the opera house, the saloons and restaurants, the hotels, the trading post, the bank, the old coffee, candy, alcohol, beer and tobacco stores, the barber shop, the post office, the clothing, jewelry and trinket stores. In some of these buildings you can go in and browse, just as if you were on a dusty abandoned movie set that has suddenly come back to life.

The original settlement of Nevada City was totally eradicated by the dredging operations in the early 1900s.. However, Virginia City was spared because it had not been established upon gold-bearing gravel.

It was Charles and Sue Bovey who also undertook the restoration of Nevada City. Nevada City is a known as a “building zoo” in which many historic cabins have been moved to the site of the original Nevada City.  A visit to Nevada City Museum will give you an idea of what it would have been like to live in the Alder Gulch area during the 1860’s.

The buildings came from across Montana and form the streets reminiscent of a 19th Century mining town. It is in all respects an open-air museum, with an entrance fee: the name is Nevada City Living History Museum and, besides the train station/Visitor Center, a historic hotel (whose lobby can be visited) and an adjacent bar/restaurant, you won’t find any other place open to the public. At the entrance of the museum they will give you a map, which will be useful for understanding the history, the use and allocation of all the beautiful building.

Along with the amazing historic buildings, as you enter the museum you come upon the music hall. A great collection of automated organs and music machines. The music machines were collected by Charles Bovey and is one of the largest collections in the West, and is noted as the largest publicly owned and publicly displayed music and arcade machine collection in the United States.

Location and Getting There (The Vigilante Trail)

Coming from the south (West Yellowstone) you need to take Hwy 20 to the junction with MT-87 N. Turn onto it and continue in the direction of Ennis. Follow the main road (Hwy 287) to Ennis, where you will then see signs for Virginia City. Nevada City is located just one mile to the northwest.

Coming from the north you need to travel the Vigilante Trail in reverse: from Butte you reach Whitehall and then travel south along MT-55 and MT-41 to Twin Bridges. From here you can get to Nevada City in 30 minutes on Hwy 287. Virginia City is of course located a few miles to the east after that.

During the 1920-30s the Vigilante Trail was a primitive dirt road leading to Yellowstone Park. Adventuresome, early travelers relied on these simple hubcap-sized trail markers fastened to trees and posts, as their only guide through this wild country.

3-7-77 refers to the Vigilantes coded warning, left to encourage frontier ruffians and criminals to leave the country, or else. This warning was later incorporated into the symbol for the Montana Highway Patrol.

Visiting Virginia City and Nevada City gives you the opportunity to breathe in the unique atmosphere of the Far West, because in those parts everything is still as it was (or almost).

What interesting places have you been to and can recommend? We’re always looking for neat out-of-the-way places to put on our list of must-sees. Thank you for reading our article. If you have any comments or questions we’d love to hear from you below.